FGM: A murderer to Womens' identity 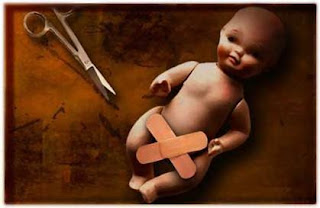 As a woman, I will say it loud and clear: I want to be among the vivid supporters to end this! I want an end to this sicken murdering of womens’ identity. This ritual has been in existence since the time of Ancient Egypt, and has spread like a fire from Asia to my hometown; Somalia and my West African sisters endure it too!
How can I not blame by people for not being well educated on this issue; for disregarding women’s’ life? How can I forget the image of my beloved friend who died because of FGM?
How should I explain to the orphan child who her mother died?
I still remember the smell of the blood my beloved Kinsi shed in forms of tears…
Such painful tragedy will never be forgotten.
Imagine my helplessness when they snatched her away- pinned her down to the ground.
Her teary beautiful brown eyes still haunt me.
Her tears fell,
Her life stopped,
And her soul was taken away that night.
Such a horrendous practice is FGM!
Although my friend Kinsi was a strong woman,
FGM killed her strong will,
Pregnancy made it worse.
How cruel could the world be?
The world stopped for her the day she gave birth…Oh beloved Kinsi.
She once grabbed my arm and said “ if I only knew being a woman brought along such pain, I would have refused to be one.” She continued on, “our words aren’t heard, our choices denied. Tonight I know what I want does not matter, but what my family desires is what matters.”
Kinsi- held on my hand- saying “take care of my child. Remind her I loved her dearly.”
Tears fell of my eyes,
I promised that I would take care of them.
She mumbled, I die because of being a woman, because of female genital mutilation.
She said “Hibaq, speak for us. Make sure the world knows a women’s idenity should not be stolen because of FGM.”
We cried into the night.
The world is made into an oppressive situation for women, the cruelty of cultures continue to kill them: Even when we know FGM is haram. Why?
My dear friend, Kinsi, died that cold morning. She bled excessively.
We cried, and cried. The pain was unbearable and the tears unstoppable.
I envisioned the sad truth ahead for her daughter: Who would not be able to see her mother? A Mum who will not see her daughter grow.
As my friend slipped away into the arms of death: I could not help but imagine the sad tales of women, our friends, our sisters, our daughters, wives and mothers.
Being forced to let her go,
I looked outside the window as I chanted verses from the Holy Qur’an.
I hope she finds peace in the hereafter, inshAllah, and her beautiful daugether who is also a victim of this crime.
I will never let this happen to baby Kindi.
I will teach her not to be ashamed when people refer to her as “unclean” for not being circumcised.
This ritual is a thing Somalis are proud when they discuss about, yet ashamed when the world talks about it.
When we know that Allah has not decreed such pain on women, why can’t we stop it?
I am enraged by Somalis who still continue to practice negative rituals.